Perfection at its finest. It was a historical weekend for the BHS Girls Varsity Basketball team hosted the Middlesex League Championship game on Saturday, February 20 at Burlington High School against the Arlington Spy Ponders.

At the time the team was undefeated at (12-0) and was seeking its first Middlesex League title since the 1995-1996 season. The Red Devils did pull off a victory and capped a perfect season with a (13-0) record but it was close. The final score in the game was 43-40. 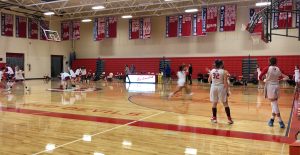 Many of the seniors said they are proud of all the accomplishments the team had this season.

“We came together and played this season as an entire team,” Senior/Captain Marina Callahan said. “We went (13-0) to end the season and my goal coming into this season was to win the league and we did.”

“We knew it was going to be a good game coming in,” Senior/Captain Sydney Pavao said. “We were just physically and mentally ready and didn’t let the little things get into our head and pushed through.”

As the team better progressed throughout the season, they had to work around obstacles due to the COVID-19 Pandemic and the modified season.

“With all the uncertainty and what was going on, we knew we wanted to go undefeated in our division,” Head Coach Pam MacKay said. “ That was before we knew we would have the opportunity to have a tournament.”

Although the season ended on a fantastic high note, the coaching staff is sad to see the upperclassmen depart in June.

“There is no denying that we are losing a significant amount of talent to graduation,” MacKay said. “This is talent we haven’t seen in a few decades. What made this group so great is that they cared about each other and there was not one selfish athlete in the bunch. Our seniors are what made us win, not just because of that talent, but because they were so willing to be a part of this team.”

“Everyone wanted the same thing this year and we all strived for it,” Callahan said. “Coach MacKay has been a mentor for me since my freshmen year through school and practices.”

“As a team we are all very close and we always had fun even during practices,” Pavao said.

Congratulations to all the athletes on the team on this amazing accomplishment.

Robert Parris
Robert Parris is BCAT’s Sports and Features Reporter. Robert first got involved with BCAT in January 2016 as a volunteer news reporter. Throughout the year, as a volunteer, he was busy developing his technical skills at the studio and his ENG skills in the field. In the summer of 2017, Robert joined the team full-time. He quickly settled into his role, providing all of the production support for our news programs, as well as providing weekly sports highlights. Robert also produces a weekly feature for BNEWS, as well as a monthly show called, BNEWS Sports Hub, and BCAT’s Game of the Week.
Burlington High School Athletics, Burlington Public Schools, Red Devils Girls Basketball
Recent Stories
BCAT News
Programming
Get Involved
About BCAT
Stay Connected