As we enter the fifth week of the spring season, the win streaks continued for the softball, boys track and unified basketball teams.

Boys Varsity Tennis:
Red Devils Tennis had an away meet in Belmont on May 3 where they lost 0-4. On May 5 the Devils were at home against Woburn, where they had a shutout victory of 5-0. Burlington had another home meet the following day against Wakefield and lost  by a close score of 2-3. Burlington is currently (7-5) and will be in Stoneham on May 9.

Girls Varsity Lacrosse:
Lady Devils Lacrosse had two blowout victories over Arlington and Belmont this past week. On May 4, Burlington had an away game in Arlington where they won 15-6 then, they had a home game at Varsity Field on May 6 over Belmont. The ladies came away with a 16-7 victory and are now (11-3) on the season. Burlington will have an away game in Tewksbury on May 9. 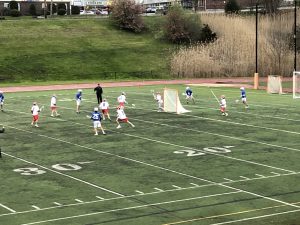 Red Devils Lacrosse also had wins over Arlington and Belmont. Burlington had an home meet at Varsity Field against Arlington on May 4 where they had a blowout win of 13-4. At Harris Field in Belmont, they won by a point in overtime 10-9. The Red Devils move to (6-4) the season and will have another home meet against Westwood High School on May 9.

Varsity Baseball:
Red Devils Baseball had a tough week as they lost three games in a row. The Red Devils competed against Woburn and Stoneham in close games where they lost by just two points against both opponents 5-7. Burlington had another home game against Nauset Regional on May 7 and lost in a one-sided affair of 1-10. The Devils move to (5-8) on the season and will compete at home against Watertown on May 10.

Varsity Softball:
Lady Devils softball is on a roll as the win streak continued. On May 3, the team was at Liberty Park in Woburn where they won by three points 4-1. Burlington was back at Marvin Field for a home game against Stoneham where they had a shutout win of 12-0. Burlington is now (13-0) this season! The ladies will have another home game against Central Catholic on May 9.

Girls Varsity Track:
Lady Devils track had a home meet against Wakefield on May 4 at Varsity Field. Burlington lost by a twenty point deficit of 58-78 and are now (2-2) on the season. The ladies will have another home meet against Wilmington on May 10.

Boys Varsity Track:
Red Devils track are now (4-0) after the 87-49 win over Wakefield on May 4 at Varsity Field. Burlington will now have another home meet on May 10 against Wilmington.

Varsity Volleyball:
Red Devils volleyball had an away game in Lexington on May 5 where they lost 0-3 in the sets. Burlington goes to (2-4) on the season and will have another away meet at Greater Lawrence Technical High School on May 9.

Co-Ed Unified Basketball:
Burlington Unified basketball is now (3-0) after a win over Watertown on May 4. The Red Devils will have an away game at Wenner Field House in Belmont on May 11.