Girls Varsity Tennis:
The Lady Devils Tennis team’s meet against Wilmington was cancelled on April 27. On April 28, the ladies had an away meet in Arlington where they lost 0-5. Burlington is currently (3-5) on the season will be back at home for a meet against Belmont on May 3.

Boys Varsity Tennis:
Red Devils Tennis was back at Rahanis Park on April 28 and 29th. On the 28, Burlington competed against Stoneham where they won in a shutout victory of 5-0. They had another home meet on the 29 against the Arlington Spy Ponders where they won in a close match of 3-2. They had a meet against Wilmington on May 2 where they lost1-3. Burlington moves to (6-3) on the season and will have an away meet in Belmont on May 3.

Girls Varsity Lacrosse:
Lady Devils Lacrosse competed against Stoneham and Watertown last week. In Stoneham, the Lady Devils had a shutout victory of 15-0. Then on April 29, they had a home meet against Watertown where they lost 3-19. Burlington is now (6-4) on the season and will have an away game at Peirce Turf in Arlington on May 4.

Varsity Baseball:
Red Devil Baseball had a home game at Francis Wyman on April 27 against the Arlington Spy Ponders where they lost 1-8. Burlington was back in the win column on April 29 when they had a 6-5 victory in Belmont. Burlington moves to (5-5) on the season and will have a home game against Woburn on May 3.

Varsity Softball:
Lady Devils Softball is on a roll as they won three games over Arlington, Belmont and Westford Academy. On April 27, they had an away game against Arlington where they won in a blowout victory of 8-1. Following the win over Arlington, the team traveled back home for a game at Marvin Field against the Belmont Marauders on April 29. The ladies won another blowout victory of 18-4. On April 30, Burlington had an away game against Westford Academy who were undefeated at the time. It took eleven innings to declare a winner but in the end, Burlington took home the victory of 1-0. Burlington is now (11-0) on the season and will have another away game at Liberty Park in Woburn on May 3.

Varsity Track:
Both track teams were back at Varsity Field on April 26 for a home meet against the Melrose Red Raiders and competed at the MSTCA District IV Relays over the weekend.

Varsity Boys Track:
Red Devils Track continued the season undefeated at (3-0) with a 76 to 59 win over the Red Raiders and will have another home meet on May 4 against Wakefield. At the MSTCA District IV Relays, Burlington came in first place out of seventeen schools and finished with a total of 74 points.  This is the Red Devils second consecutive win at the MSTCA Division IV Relays. Congratulations gentlemen on being named relay champs again! You can check out the full results at MSTCA.org

Varsity Girls Track:
Lady Devils Track winning streak came to an end against Melrose as they lost 46 to 90. This loss moves the team to (2-1) on the season and they will have another home meet against Wakefield on May 4. The ladies also attended the MSTCA Division IV Relays over the weekend at Pembroke High School. Burlington finished with a total of 43 points and came in at fifth place out of nineteen other schools. You can check out the full results at MSTCA.org 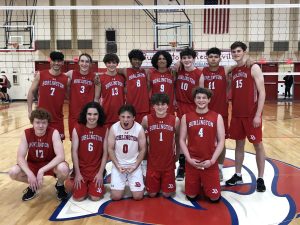 Red Devils Volleyball had three matches last week against Salem, Somerville and Arlington. On April 27, the team had an away meet in Salem where they lost in a five set match of 2-3. Burlington was back in the win column on April 29 with a shutout set win of 3-0 at home against Somerville. Click here to check out the video highlights. Click here for the game in its entirety. The Red Devils had an away meet in Arlington on April 30 where they lost in another five set match of 2-3. Burlington moves to (2-3) on the season after losing to Winchester on 0-3 in the meet on May 2. The Red Devils will have an away game in Lexington on May 5.

Co-Ed Unified Basketball:
The Burlington Unified Basketball team had their home opener on April 27 against Lexington where they won 43 to 28 and improve to (2-0) this season. The Red Devils will have another home meet against Belmont on May 11.