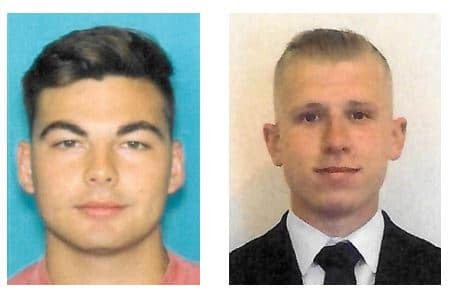 The ranks of the Burlington Police Department just got a bit stronger.

At the recommendation of Chief Thomas Browne and Deputy Chief Robert Kirchner, Town Administrator Paul Sagarino appointed Officer Brendan Hofferty and Officer Devin Neal to the force during the Select Board meeting of Monday, January 10.

“I’d like to congratulate Officer Hofferty and Officer Neal and welcome them to the Burlington Police Department,” Chief Browne said. “They each bring their own unique backgrounds, experiences and skills, which will serve them well as they work on behalf of the entire community.”

According to a release from the department, Officer Hofferty has worked as a Civilian Dispatcher with the Millis Police Department. He is a 2020 graduate of Merrimack College in North Andover, majoring in Criminal Justice. While attending a Washington Semester Program at American University in Washington, D.C., Officer Hofferty interned with the Metropolitan Police Department Office of General Counsel. There he worked alongside Department staff and assisted in civil and criminal cases.

He is an active volunteer, recently serving as a tutor at the Boys & Girls Club in Lawrence, and raising money for causes including assisting disabled veterans, refugees, and those affected by COVID-19.

Officer Neal has volunteered with several charitable groups in the Merrimack Valley.

Rich Hosford
Richard has over 14 years in community news and experience covering local politics, crime, events and features. He began his career at a weekly newspaper then moved on to become a daily reporter. In 2010 he became the first editor of Burlington Patch before joining BCAT in 2014 as News Director. Rich has a master's degree in Journalism and Public Policy from Northeastern University.
Police, Select Board
Recent Stories
BCAT News
Programming
Get Involved
About BCAT
Stay Connected