Two groups who have differing opinions on what to do with a piece of land adjacent to the Town Common met to see how they could work together to advance both their interests in the future.

The Burlington Historical Commission and the Burlington Sculpture Park Committee met on Wednesday in a joint meeting to discuss the site of the park which is adjacent to Grandview Farm. Since the Sculpture Park was first proposed some members of the commission said they believed the land was designated to be used for projects of their creation under a Planned Development Project (PDD) and that the sculptures were not an appropriate use of the parcel. However, due to a subsequent overlay placed on the site that turned out not to be the case and the Sculpture Park Committee was given the green light to proceed with the park.

The meeting on Wednesday was an attempt, which largely seemed quite successful, for the two groups to come together and work out their differences of opinion.

“I think we as residents should come together and work together for the best outcome for the town,” Select Board Chair Nick Priest said. “That’s what we do.”

Barbara L’Heureux, chair of the Sculpture Park Committee, said that was her intent as well.

“I think I speak on behalf of the committee to say we want to work with the Historical Commission to make this property something we can both enjoy,” she said. “It’s better if we both work together to share this land and work together to see what we can achieve.”

Historical Commission member Mary Nohelty said her intent is to use the park to highlight Burlington’s history but is open to sharing it will the Sculpture Park.

“We need to preserve our history,” she said. “I look at Grandview and I see a dairy farm with a meadow and what would be on the meadow? Farm equipment. I don’t disapprove of the sculptures but I don’t think they all belong in that spot. When this started I said I hope they put in something that reminds us of our history.”

Sculpture Park Committee member Jon Sachs said he would like to see additional farm equipment featured on the site beyond the antique wheeled rake that is there now.

“I think we need at least three big pieces of farm equipment because right now the rake is lonely,” he said, adding that the committee would be open to suggestions for items from the commission based on what they have in storage or could obtain. “I feel if we could get at least two more pieces of farm equipment we could put them out there with the farm and they would bend beautifully with the sculptures.” 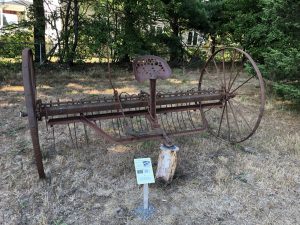 In response to reducing the number of sculptures in the park to make room for additional submissions from the Historical Commission, L’Heureux said she was open to moving some of them but wanted to time it so as not to reduce the appeal of what is currently on the site.

“I think it’s reasonable for us to move some of the pieces,” she said. “What I don’t want to do is abandon the site and have it return to what it was before. People used to not even notice it and now we see people out there having coffee or enjoying a picnic.”

There was also discussion of using the Sculpture Park as a way of starting a path to the Historical Museum by having a series of sculptures and historical items along the common that residents could tour. Increasing visitations to the museum is one of the commission’s primary goals.

In the end nothing was set in stone but the two groups pledged to work together moving forward. L’Heureux extended an invitation to have a member of the commission join the committee to keep them focused on preserving history as they consider new installations. There was also talk of a joint event at Grandview sometime in the fall that would allow both groups to highlight what they have done and hope to achieve in the future.

Select Board Chair Priest said he thought it was a productive meeting.

“This has been a fantastic conversation and what I’m hearing is we have multiple pieces we could place on the site,” he said.

Rich Hosford
Richard has over 14 years in community news and experience covering local politics, crime, events and features. He began his career at a weekly newspaper then moved on to become a daily reporter. In 2010 he became the first editor of Burlington Patch before joining BCAT in 2014 as News Director. Rich has a master's degree in Journalism and Public Policy from Northeastern University.
Recent Stories
BCAT News
Programming
Get Involved
About BCAT
Stay Connected