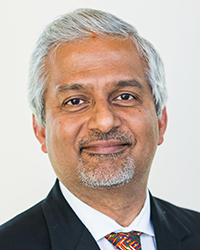 “Dr. Shekar is a highly skilled surgeon who brings a depth of experience around complex patient cases that will further strengthen our already outstanding team of cardiothoracic surgeons, and we are thrilled to welcome him to LHMC and into his new role as chair of Cardiac and Thoracic Surgery,” said Steven Stain, MD, chair, Department of Surgery at Lahey Hospital & Medical Center. “His wisdom and expertise will advance patient care and further elevate LHMC as a nationally and internationally recognized center of excellence in the treatment of heart disease.”

Prior to joining LHMC, Shekar was chief of the Division of Cardiac Surgery at Brigham and Women’s Hospital (BWH) and associate professor of surgery at Harvard Medical School. Shekar joined BWH in 2001 as a cardiothoracic surgical fellow, became a faculty member in 2004 and then served in many leadership roles prior to becoming chief of the division.

“I am honored to take on this new role guiding our talented cardiac and thoracic team as we build upon LHMC’s already outstanding reputation for cardiothoracic surgery, delivering high-quality cardiovascular and thoracic surgical care with compassion and personal attention,” saidDr. Shekar, who will also be nominated for professor of surgery at Tufts University School of Medicine.

Shekar has performed close to 5,000 heart surgeries and authored more than 65 peer-reviewed publications along with several book chapters and has presented at national and international conferences, the release states. His clinical interests include surgery for genetically triggered heart disease such as in Marfan and Loeys-Dietz syndromes and hypertrophic cardiomyopathy, minimally invasive valve surgery, aortic aneurysm surgery, complex cardiac surgical cases such as surgery for radiation-induced heart disease, carcinoid induced heart disease, adult congenital heart disease, pulmonary thromboembolism and reoperative cardiac surgery. He is also known for his philanthropic work in cardiac surgery in Rwanda and India.

Dr. Shekar received his medical degree from Bangalore Medical College and Research Institute in India. After completing his medical, general, and cardiothoracic surgical training in India, Shekar moved to Australia, where he pursued Advanced Training in Cardiothoracic Surgery at the Fremantle Hospital in Western Australia and the Royal Adelaide Hospital in South Australia from 1998-2001. He completed an advanced fellowship in adult cardiac surgery at Brigham and Women’s Hospital and joined the Brigham and Women Hospital’s faculty in 2004. He is also a fellow of the Royal College of Surgeons of Edinburgh. Recently, Shekar completed his MBA from the MIT Sloan School of Management.

Dr. Shekar is succeeding Richard S. D’Agostino, MD, who has served in the role as chair of Cardiac and Thoracic Surgery at LHMC since 2005. D’Agostino will continue his clinical, teaching and research responsibilities in the department.

“We are grateful for Dr. D’Agostino’s many years of thoughtful leadership that helped grow the Cardiothoracic Surgery Department and build a strong foundation for future innovation,” said David L. Longworth, MD, president of Lahey Hospital & Medical Center. “As a respected and collaborative colleague, we are fortunate to welcome Dr. Shekar’s expertise and caliber of talent to our team.”